The Jew and the Christmas Tree 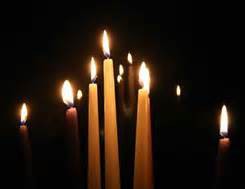 As a Jew growing up in suburban Connecticut, I always wanted a Christmas tree. My  parents, raised blocks apart in the Bronx while the Holocaust raged overseas, refused to yield. We celebrated Hanukkah, proudly displaying our menorah in the living room window.

The closest we got to a tree was on Christmas Eve, when we visited family friends who went all out on the decorating. They saved a few stray ornaments for my brother and me to hang on their massive evergreen, and we basked in its twinkling splendor while gobbling cookies from a tiered silver tray. On the way home, we peered through the car windows, wistfully counting the houses sporting Christmas lights.

Occasionally we found small gifts waiting for us by our fireplace on Christmas morning. “You’ve been so good, Santa must have decided to drop off a little something while he was in the neighborhood—even though you’re Jewish!” my mother would say. It was a sweet gesture, but the tokenism merely highlighted my deprivation. If only we’d had a tree, who knows what bounty Santa might have bestowed?

My Christmas tree envy faded with the onset of adolescence, when I contracted an incurable case of contrarianism. Suddenly, my goal was not just to be different from everyone else, but also to openly disdain the status quo. Newly outraged over deforestation—among many other things—I couldn’t believe I had once yearned to kill a tree so I could hang lights on it. Shunning Christmas and its trappings in favor of the Jewish festivals became a point of pride, heightened by my growing awareness of the existence of anti-Semitism.

For 15 years, Christmas was a non-event in my life. Then I met Mr. 70 Percent, who back then was so eager to impress me that he actually completed closer to 80 percent of any given household task. For better or worse, he was a devout non-believer in everything except the excesses of Christmas. It was fine with him if we raised our kids Jewish—but the tree was non-negotiable.

The first few years I cried. Each fragrant pine he hauled into our shared living space felt like a violation, a repudiation of my Jewish heritage and my lifelong ambivalence toward Christmas. I looked enviously at the other mixed-faith couples we knew whose non-Jewish partner enthusiastically embraced Judaism—in part to get out of celebrating Christmas.

That wasn’t my husband. And though I wished it were, it didn’t seem quite fair to ask him to forsake something he had grown up with and clearly loved, just because I didn’t want it around. After all, he’d made a much bigger concession in accepting a Jewish upbringing for our children; surely I could make room for something as simple and lovely as a tree.

And so I did, with a little less angst each year.

Our kids, when they came along, thought they’d hit the jackpot: Hanukkah and Christmas! They were the envy of their elementary-school peers. But it was their grandmothers who taught them how truly lucky they were: every year, my mother-in-law–a lapsed Catholic–gave each of her Jewish grandchildren a new menorah for Hanukkah: Mickey Mouse and fire engines, flowers and jungle animals. And my mother presented them with new ornaments for the Christmas tree she’d never wanted in her own home. 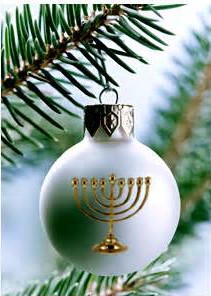 Now the tree is as much a part of our season as the menorah, and the 30 percent of the dinner dishes left unwashed in the sink. I have grown genuinely fond of the rituals I craved as a child and ridiculed as a teen: selecting the perfect specimen, draping its branches with strands of white lights, setting the gold wire star gently on top. But mostly what I love is placing the ornaments that tell our family story: the black Lab, the Yankees cap, the Eiffel Tower, the bassoon and the guitar, the Popsicle-stick frames and glittery pinecones preserved from preschool days. And always, prominently near the top, the delicate, blown-glass Jewish symbols—a menorah, a dreidel, and a Star of David—that we bought together years ago, when we were just beginning to find our way through the thicket of a mixed marriage.

Susan H. Greenberg spent 22 years as a journalist for Newsweek Magazine. She now works as a writer, editor, teacher, and parent of three children, with whom she strives always to maintain a varnish-free relationship.
View all posts by Susan H. Greenberg →
This entry was posted in Family life, Holidays, Marriage and tagged Christmas, Hanukkah, interfaith, menorah, mixed marriage, tree. Bookmark the permalink.

9 Responses to The Jew and the Christmas Tree