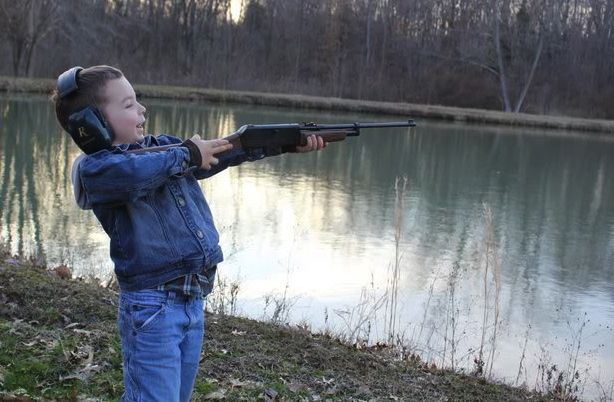 Our arsenal keeps growing. We already own a pretty good quality bow and arrow and several AirSoft guns; for those of you with pacifist sons or daughters only, these are “toy” weapons that shoot little round pellets, which are neither soft nor biodegradable, despite the claims on the ammo bag. Now my 13-year-old son is angling for an Air Gun. As far as I can tell, this is a euphemism for “BB gun” designed to make it sound more benign: just gentle little puffs of air occasionally interrupted by piercing metal projectiles.

For this latest obsession, I blame YMCA camp. My son ranked the overall sleepaway camp experience a 6 out of 10, but the riflery class got top marks. Apparently he’s a pretty good shot and earned several awards; I don’t know if that makes me feel better or worse. But what really won him over was the riflery counselor, an accomplished marksman, hockey player and all-around resourceful good guy–who also happens to be a staunch Democrat. He wears an Obama belt, my son said.

This is just the sort of role model I’ve always dreaded. In the past, we could temper his militaristic streak by tarring him with our family’s worst slur–“Republican!”–and accusing him of kowtowing to the NRA. But now he’d found a totally cool, gun-slinging, ammo-packing, laser-eyed, steady-handed Obama supporter. He could have it both ways.

It made me long for the days when the only views the kids had were ours. When my son was two and a half, I dragged him and his big sister through a driving rainstorm to Washington so we could attend the Million Mom March, an anti-gun Mother’s Day rally on the mall. This was in 2000, a year after Columbine; I was working for Newsweek at the time and conducted an interview with three Scottish mothers whose kindergarten-age daughters had been killed in a school shooting in Dunblane four years before. They had come to Washington to show their support.

As the mother of young children, an animal lover, and an unrepentant pacifist, I identified  strongly with their cause. I couldn’t envision a single situation that I thought a gun would benefit. I still can’t. But what’s a parent to do when your child loves something you don’t, whether it’s guns, eyebrow piercings or Republican politics?

Oh, if only I had video of that day on the mall! My son leaped out of his stroller, clutching a hot dog, and joined a small line of children giggling and chanting, “No more guns! No more guns!” I think he was even holding a sign.

His inner Rambo began to emerge soon after. Driving in the car two years later,  he grabbed a graham cracker, took a few strategic bites, and said “Look! It’s a gun!” before pointing it at my head. From there we moved, at his persistent urging, into water pistols and cap guns, and then eventually to AirSoft. At first there were all sorts of rules–no pointing them at anyone’s head, no using them without an adult at home, no guns in the house. But before I knew it there was a rifle propped on the family room couch, and little white pellets rattling around the dryer and stuck in the cracks between our old floorboards. Posses of boys I couldn’t recognize through the goggles and camouflage gear were sneaking regularly across our back patio. My son was so desperate for a constant shooting companion that when his little sister turned 8, he bought her an Airsoft starter pistol–in pink.

I remain staunchly opposed to the acquisition of the “Air Gun.” But I am well aware that I once felt the same way about the cap gun, and the AirSoft rifle. Banning weapons is a slippery slope, as any Republican will tell you. I even know a couple of Democrats who might say the same. 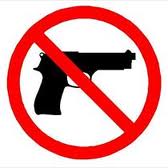 Susan H. Greenberg spent 22 years as a journalist for Newsweek Magazine. She now works as a writer, editor, teacher, and parent of three children, with whom she strives always to maintain a varnish-free relationship.
View all posts by Susan H. Greenberg →
This entry was posted in Boys will be boys, Family life, Kids, Parenting, Teenagers and tagged air soft, Democrats, guns, NRA, riflery. Bookmark the permalink.

6 Responses to The Last Armed Democrat