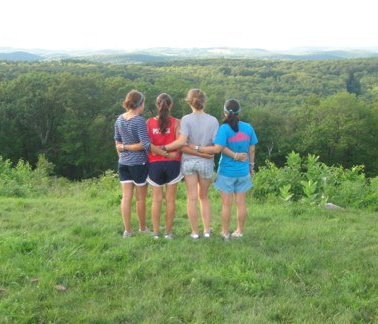 Usually when the kids arrive home after being away, we enjoy a brief honeymoon period: they are engaged, chatty, appreciative, helpful and pleasant. Not this time. My 16-year-old daughter returned yesterday after four weeks of being a junior counselor at a YMCA girls’ sleepaway camp–the very one I attended as a child 35 years ago–and she clearly was not happy to be home. She was unusually distant and short with us, though she was reasonably cheerful with her brother and sister.

I was surprised by how much her remoteness bothered me. Certainly it was out of character; usually she is open, sweet and communicative. Even when I tried to engage her by asking questions, she shut down. I asked her if she was irritated at me and she said, in an irritated voice, “Why would I be irritated at you?” Because I represent home and authority? Because I am not your camp friends? Because I still think of Camp Mohawk partly as “mine” and you think it’s entirely “yours”? Then I asked her if she was still in the “camp zone” and she said “Yes” before retreating to her room to turn up the music a little louder.

I distinctly remember the letdown of coming home after four liberating weeks at camp or–even more acutely–after a semester of college, feeling hemmed in by my parents’ rules, the thin walls of our house, the return to family routines and responsibilities. It should have made me sympathetic to my daughter’s homecoming experience, but it didn’t. Instead, I felt how I imagine my mother used to feel: unappreciated, extraneous, disconnected, annoyed.

I realized, watching “The Wizard of Oz” later that evening with my 9 year-old, that it’s all part of my displacement as the great and powerful wizard. She’s pulling back the curtain, not necessarily because of anything I did, but because she’s ready to. Being away from home makes you see your family in a stark, new light, and while that can make you appreciate them more, it also highlights their limitations–and your own strengths. I have begun to notice my competence outstripped by that of my teenagers in several ways, mostly involving technology. But even when my 13-year-old son and I hiked Mt. Washington a few weeks ago, I was surprised by how abruptly we had shifted roles: instead of my waiting for him and urging him on, as I would have done a few short years ago, he was the one waiting for me at every fork in the path and offering me his hiking poles when the rocks got slippery.

I have heard people say that the worst summer they ever had with their teenager was right before he or she left for college. This makes evolutionary sense to me: fighting over everything from curfews to laundry to car privileges is nature’s way of preparing both parent and child for the separation. I guess we’re just getting a head start.

Susan H. Greenberg spent 22 years as a journalist for Newsweek Magazine. She now works as a writer, editor, teacher, and parent of three children, with whom she strives always to maintain a varnish-free relationship.
View all posts by Susan H. Greenberg →
This entry was posted in Family life, Kids, Parenting, Reality check, Teenagers and tagged leaving the kids, Mt. Washington, separation, sleepaway camp, Wizard of Oz. Bookmark the permalink.