A World Without Jobs

Of course I’m sorry that Steve Jobs is gone. I enjoy Apple products as much as anyone. More important, he was far too young–56–and lived the kind of unconventional, multi-faceted, follow-your-bliss life we should all aspire to. In addition to an innovative genius, we lost a role model for walking the crooked path.

I expected the public outpouring of grief and self-pity we’ve seen in the media. (My personal favorite: the Onion’s short tribute, “Last American Who Knew What the Fuck He Was Doing Dies.”) And I wasn’t surprised that my husband, a diehard Apple fanatic and early adopter of all things technological except our vacuum cleaner, joined the many who changed their Facebook photos to: 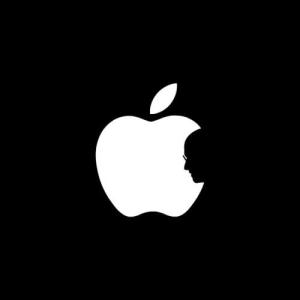 But I have been surprised by how hard the kids I know have taken it. The editors of the high school newspaper I advise looked ashen, and set out to crash a story just ahead of deadline on student reaction to Jobs’ death. Indeed, the newsroom itself was a sea of Macbook Pros. “There are times in life when we wish we could hit Apple+Z and go back to the way things were moments beforehand,” began their eloquent editorial a few days later. “Wednesday night we felt that urge.”

My 16-year-old daughter said she was “as sad as I can be about someone  I didn’t know at all.” Scores of her Facebook friends changed their status to reflect his passing, and shared all sorts of photos and videos, particularly his much-admired 2005 Stanford commencement address. Some coped by making jokes, like “Guess an Apple a day doesn’t keep the doctor away,” or “When you’re Mac, you’re not used to things crashing. He didn’t see it coming.”

When I was 16, the only business titan I was even remotely aware of was Lee Iaccoca, whose products remained off-limits to me. (I knew about Walt Disney, too, but he had died when I was three, and in any case, his reputation for racism and anti-Semitism clouded his achievements in entertainment.) The most exciting innovations of my day were the Walkman and the Selectric typewriter with that white correction ribbon, but I certainly couldn’t have told you who invented them.

Today’s kids saw the Apple insignia about the same time they met their parents: it adorned the iPhones and iMacs that spread the news of their arrival and transmitted the first photos of them. Five-year-olds routinely ask Santa for iTouches, and whiny toddlers demand iPads to pass the time on long car rides. They’ve never known a world without  Apple; now they will be forced to know one without Jobs.

The 13-year-old son of a close friend perhaps summed it up best when he posted on his Facebook wall, “Thanks for my childhood. RIP Steve Jobs.” His mother was a little miffed; after all, she’s the one who bought him that iPad for Christmas.

Susan H. Greenberg spent 22 years as a journalist for Newsweek Magazine. She now works as a writer, editor, teacher, and parent of three children, with whom she strives always to maintain a varnish-free relationship.
View all posts by Susan H. Greenberg →
This entry was posted in Family life, Kids, Parenting, Teenagers and tagged Apple, computers, Steve Jobs. Bookmark the permalink.

1 Response to A World Without Jobs