It was somewhere around the fourth hour of the softball tournament that I started silently rooting against my daughter’s team. “Swing!” I’d telepathically command the batter as the ball sailed two feet over her head. “Call it a strike,” I begged the ump. It’s not that I dislike softball; both my daughters play, as I did, and I am a devoted and enthusiastic fan at regular season games. Weekend tournaments I find more troubling, though that’s true of almost anything that takes longer than two hours: movies, concerts, meetings, road trips. Even so, I had no problem adjusting my attention span for my older daughter’s division-winning high school varsity season.

But this was a league of third- and fourth-graders, who can hit much better than they can field and who, if my 9-year-old is any guide, are far more interested in scanning the horizon for the ice cream truck than in turning a double play. Or even a single play. Billed as a fun, all-day family affair (an oxymoron if there ever was one), the Round Ro 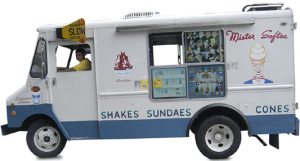 bin tournament promised a DJ, face paint, and [alcohol-free] tailgating. Starting at 10 a.m., the six teams would play three two-inning games apiece. The four “winning” teams would advance to the semi-finals, whose victors would compete in a four-inning final. The whole thing would wrap up somewhere around 6:00 pm.

Perhaps I am the only spoilsport, and the other parents were actually hoping for runs so they could spend eight hours sitting in the sun on hard metal bleachers. But I doubt it; they’re just better at faking it than I am. Still, I knew to suppress my  groan when our little “Green Dinos” won their first game. The girls immediately bombarded our tailgate tent–whose coordination had involved about 40 “Reply to All” emails bearing information like “I’ll bring napkins”–for Gatorade, watermelon and brownies. It was 11:15.

Plenty of my thinking peers are aware of–and alarmed by–our reputation as overindulgent, hyper-competitive parents. Yet when it comes time for events like the Round Robin tournament, which effectively showcases both traits, no one wants to be the Debbie Downer who says, “This is ridiculous! They’re 9 years old!” Even I am only brave enough to say it in a blog that no one reads. 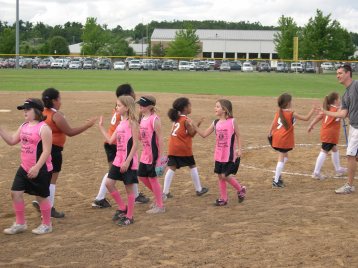 After the Dinos lost the next two games, I cheered up. I might get the laundry and grocery shopping done after all! But as we gathered in the tailgate tent for lunch (thankfully, someone had had the excellent idea of ordering pizza instead of lugging gas grills and hamburger patties to the field), word came down that one of the teams with two losses would play in the semi-finals; it all depended on the scored-run differentials. I paced around tensely while the coaches and umpires conferred.

Finally, the coach gathered the girls around. “Well, Dinos,” he said, “you played great… but it’s the end of the line for us.” I started to cheer, but quickly converted it into a groan. My daughter came bounding over, sparkly green ribbons flying. “Am I free now?” she asked. It was only 3:15, and one of her good pals was on a different “losing” team. Playdate possibilities suddenly loomed, full of promise. So while the Lemonheads and the Purple People battled it out on the diamond, they spent the rest of the afternoon running through the sprinklers and chasing balls in the yard. 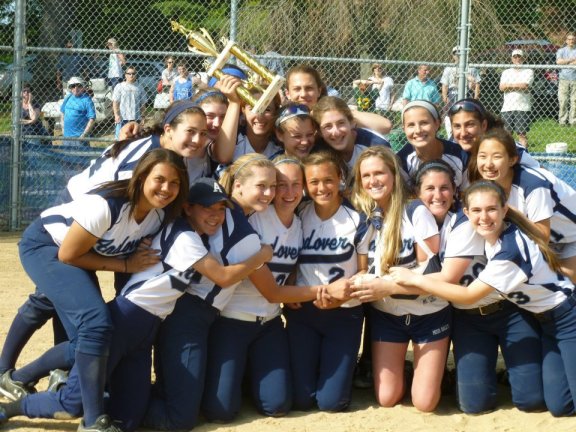 Definitely worth watching in a tournament…

Susan H. Greenberg spent 22 years as a journalist for Newsweek Magazine. She now works as a writer, editor, teacher, and parent of three children, with whom she strives always to maintain a varnish-free relationship.
View all posts by Susan H. Greenberg →
This entry was posted in Family life, Kids, Parenting, Reality check, Sports and tagged ice cream truck, Round Robin, softball, tailgating, tournament. Bookmark the permalink.

9 Responses to Who’s the Winner Now?