In the event that a New England blizzard blows you off course and you can’t get your bearings, these signs will help. While you might spot any one of them in any number of states, if you happen to see them all within a 50-mile radius, you are definitely in Vermont. Taken together, they reinforce my sense that Vermont is a charming, if bewildering, mass of contradictions: rural and sophisticated, socialist and private, animal-loving and trigger-happy, infinitely tolerant as long as you recycle. The top 10 signs you’re in Vermont: 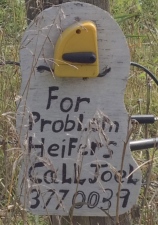 1. Those gentle, peaceful creatures grazing in the fields? Don’t let them fool you. Apparently cows can be trouble. I saw this sign while running down a dirt road, when the only problem I noticed with the heifers was that their damn mooing was drowning out my playlist. But according to a former colleague who recently retired to Vermont, a “problem heifer” is one who breaks through the electric fence and wanders off. He recalls once being awakened by a neighbor’s Guernsey leaning in his bedroom window. I guess he had to call Joel. 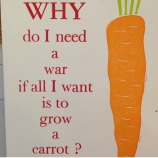 2. If my oldest daughter and I hadn’t spotted this sign in a local yoga studio, I might have thought it was mocking my new home state. In something of a non-sequitur, it encapsulates two of Vermonters’ favorite activities: denouncing armed conflict and promoting small farms. If only the Pentagon had planted a vegetable garden, maybe we could have kept U.S. troops out of Afghanistan.

3 & 4. Of course, Vermonters don’t mind armed conflict when it’s with a wild animal. These two signs neatly sum up the state’s divergent views on guns. On the one hand, don’t even think about trying to pry that firearm out of a Vermonter’s hands. On the other, let’s at least make it a fair fight.

5. If, during that fair fight, you succeed in killing a deer, bear, moose, or turkey, you are required to tell the state. Just head to one of the more than 200 “Big Game Reporting Stations,” located in such places as the Sunoco in Putney, the Hinesburg General Store and–perhaps most conveniently–Joe’s Taxidermy in Reading.

6. At the same time, don’t try killing a moose with your car–even if you’re planning to report it. It will hurt you a lot more than it will hurt the moose.

7 & 8. One of the best things about Vermonters is that they are crazy about their dogs. In Montpelier, the city council’s “Dog Waste Working Group” recently recommended that the state capital institute dog waste stations to encourage–without forcing–people to pick up after their pets; they haven’t yet gone as far as levying fines on offenders. Stores routinely leave bowls of water outside their doors for shoppers’ canine companions, and many–including the high-end outdoor clothing store where I spotted this sign–invite them in:

Posted in a South Burlington park, this sign shows how much fonder Vermonters are of the state’s very smart dogs than of their owners: 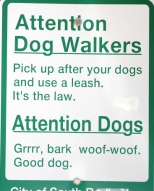 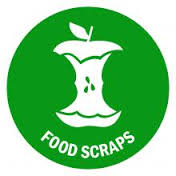 Just as I mastered the art of throwing trash in one bin and recyclables in another, many Vermont dining establishments have added a third container: food scraps. You know, for compost. So now I often find myself staring, paralyzed, into an unappetizing tangle of coffee grounds, banana peels, sandwich crusts, and soggy lettuce, and wondering: does a tea bag count as compost or trash? What about dirty napkins? Pretzels? Eating out shouldn’t be this stressful.

10. The cold here is so constant and pervasive that it’s just a fact of daily life, like mountains and goat cheese. Still, I find it heartening to know that if we lose power or heat, there is at least one place we can go, courtesy of a local church. I was especially grateful when I woke up the other day and found this forecast on my iPhone: 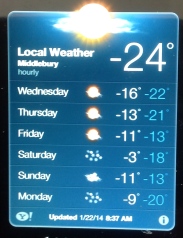 Then I realized I had inadvertently switched the scale from Fahrenheit to Celsius, meaning it was actually only -11. Everything’s relative in Vermont. The warming shelter can wait.

Susan H. Greenberg spent 22 years as a journalist for Newsweek Magazine. She now works as a writer, editor, teacher, and parent of three children, with whom she strives always to maintain a varnish-free relationship.
View all posts by Susan H. Greenberg →
This entry was posted in Reality check, Small-town life and tagged compost, gun control, hunting, road signs, Vermont. Bookmark the permalink.